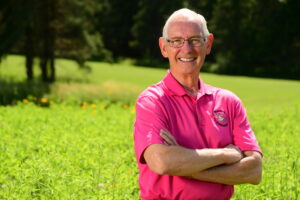 Clark McLeod is a life-long Iowan and resident of Cedar Rapids who has spent nearly four decades working to build and grow his community. Perhaps best known for his corporate endeavors, he built numerous companies from scratch in Cedar Rapids, taking two to publicly traded status on the New York Stock Exchange. His entrepreneurial efforts added thousands of jobs to the community since 1980, and his former employees and businesses still form a significant base of Cedar Rapids’ current economy.

A former mathematics and science teacher at Franklin Junior High in Cedar Rapids, McLeod now focuses his efforts and resources on environmental restoration of pollinators and pollinator habitat, with a special focus on monarch butterflies. As he did in his corporate endeavors, McLeod continues to set challenging goals and leverage resources to significantly impact the environment.

He invites you to join him in the movement to restore and protect natural infrastructure.

Co-Founder and CEO, Monarch Research Project, 2015 to present
The Monarch Research Project’s five-year goals are to dramatically impact the population of monarch butterflies, while simultaneously catalyzing the restoration of thousands of acres of pollinator habitat. MRP’s ultimate “moonshot” is to create a replicable model for restoring native habitat and the monarch population nationwide. The first step toward this goal focuses on a single county in Iowa. Efforts are underway with the City of Cedar Rapids, Linn County, and private landowners to increase pollinator habitat and create Monarch Zones® utilizing MRP’s exclusively designed BioTent™, which protects monarch eggs, larva, pupa, and chrysalis from predators.

2001 Development Corporation, Co-Founder, 1987 to present
McLeod and other investors founded this downtown development company in 1987. For 30 years it has worked to maintain a vibrant downtown in Cedar Rapids, restoring older properties, building new structures, and purchasing land for significant future uses. 2001 Development provides resources and expertise when not available via the private sector.

McLeod Foundation, Co-Founder, 1991 to present
McLeod and his wife, Mary, formed the foundation in 2001 to invest in areas where their dollars can gain high ratios of leverage. The foundation’s focus is economic development, education, and the environment. To date, 50 percent of the dollars invested have supported Linn County, Iowa, causes.

Directory Publishing, Founder, 1986 to 2002
Directory Publishing, which grew to serve 40-plus states and more than 50 percent of households, was purchased by YellowBook in 2002 for $650 million, forming the largest yellow page directory publisher in the world.  The company now operates as Hibu.

McLeodUSA, Founder and CEO, 1991 to 2001
McLeodUSA was the largest independent, competitive local exchange carrier in the nation, employing more than 10,000 people. The company became a public corporation in 1996 and was added to the New York Stock Exchange. The telecom industry’s melt down following the September 11 attacks forced most competitive telecom companies to reorganize; McLeodUSA did so in 2001. Purchased by Paetec in 2007, it currently is part of Windstream.

McLeod Academy, Founder, 1993 to 1998
A former teacher and the son of educators, McLeod founded the McLeod Academy in 1993, utilizing a model of individualized instruction with heavy emphasis on computer technology. Founded as a for-profit K-8 school in anticipation of a national school voucher program, the school now is operated by a group of parents and flourishes today as Summit School in Cedar Rapids.

Teleconnect/TelecomUSA, Co-Founder, 1980 to 1990
In 1980, McLeod founded Teleconnect, an Iowa-based long distance telecommunications company, serving as chairman and CEO. Originally the company focused on reselling telephone equipment, but by 1985, the Teleconnect team contracted with the Williams Companies to build the first Midwest fiber infrastructure from Chicago to Denver, which then was extended to the east and west coasts. This formed the country’s first transcontinental fiber cable, preceding the later builds of the major carriers. In 1988, the Teleconnect became a public company on the New York Stock Exchange. Following a merger with SouthernNet, Inc., the company was renamed TelecomUSA  in December 1988 and became America’s fourth largest long-distance telecommunications company, with nearly 6,000 employees. In August 1990, McLeod negotiated the sale of the company to MCI for $1.25 billion.